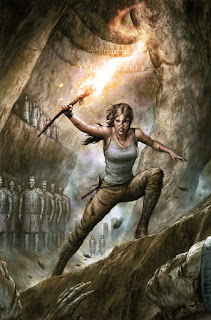 The Tomb Raider comic series by Dark Horse will pick up again in February following Rise of the Tomb Raider. Writer Mariko Tamaki will be taking Lara on adventures in this run.

“Mariko Tamaki’s writing is impactful and emotionally resonant,” said series editor Patrick Thorpe. “When I was researching her work for Tomb Raider, I read This One Summer cover to cover and said to myself, ‘That was perfect.’ Since becoming an editor, I don’t know that I’ve ever said that.”

“I am thrilled to be given the opportunity to write up some adventures for Lara Croft. I feel like I’ve just gotten this new, incredibly daring, strong, valiant friend, and now I get to think up super-cool stuff for her to do,” said Mariko Tamaki. “And she has to take me with her. And we can go anywhere, and do anything? Right?! What could be better than that?”

Read her interview with Comic Alliance.

Head on over to Dark Horse and check out all the comics released so far.

Posted by MaxRaider at 8:33 PM