The "Woman VS Wild" series continues with a deeper look at all that is to come in Rise of the Tomb Raider: 20 Year Celebration, including Croft Manor! Check it out!
Posted by MaxRaider at 12:55 PM

WIP Concepts for Lara Croft and the Blade of Gwynnever 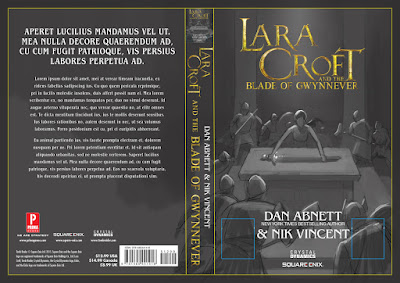 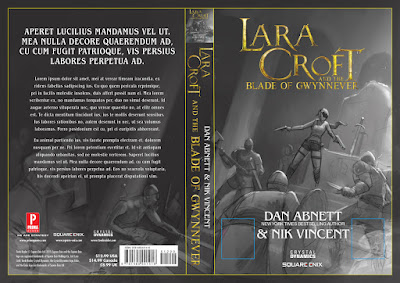 Crystal Dynamics concept artist, Brandon Russell, demonstrates his process in creating the cover for Lara Croft and the Blade of Gwynnever. See the final cover and read more HERE.
Posted by MaxRaider at 10:10 PM


I was recently invited to a private viewing of the content shown at this past Gamescom event. I was joined by many of the other fansite webmasters as we watched the footage unfold and Meagan Marie and Will Kerslake answered some of our eager questions. What was previously only shown behind closed doors in the Gamescom Theatre is now revealed for all to see in the video above. Rich Briggs narrates the video giving a little more insight of what to expect without spoiling too much.

The demo opens up with what is called "Thin Ice," showcasing a section from the middle of the game. From what I could tell the game runs very beautifully on the PS4. We still need confirmation on the controllers supporting lighting and sound effects, as was with the reboot on PS4, but Will did mention the controller works as a flashlight in the VR mode of "Blood Ties." Speaking of VR, it sounds as though it is a very rich experience worth trying. Regarding the inclusion of old school, polygonal Lara skins, Meagan spoke of wanting to capture the history of the franchise with a good variety and even including the AOD sunglasses. The "Extreme Survival" difficulty mode sounds very difficult. There are no checkpoints. The only way to save is to fight your way to the next available campsite and ignite the camp. New achievements/trophies are added to the package as well.

Now the "Blood Ties" content in Croft Manor is what I'm most excited about. Lara's uncle is contesting her legal status in ownership of the Manor and she must find her father's will and testament to prove she is the rightful owner. This story-driven content actually fits into the main game's timeline in between Syria and Siberia, which I find is a nice touch. Lara wears her "London Jacket" outfit during this level as she discovers rooms she had never been in. There will be plenty of clues, relics, and even references to the old games. "So many throwbacks and secrets" Meagan noted. Will also spoke of "comments from Winston about certain freezing devices."

"Lara's Nightmare" is a new mode playable in Lara's Manor after completing the story portion. The level makes more sense to me now after hearing Meagan and Will elaborate. Think of it as Lara having a literal nightmare. Where everything that she has seen, everything she has encountered is culminating into one dark, twisted dream. It's the Manor story again, but then Lara's uncle is morphed into a demon like visage condemning her to death for fighting him on the matter of the estate. The manor is flooded with zombie-like men coming for Lara constantly. "Supernatural has always been a part of the Tomb Raider universe" said Meagan. You only have one life. You are trying to beat the level and get the highest score. You have to survive the hordes of zombies, destroy floating skull effigies, and then there is a boss apparently, which I did not see. The level is randomized each time you play as well which makes it that much more of a challenge.

Last, but not least is the Co-Op Endurance Mode which has you surviving with a friend in the bitter wilderness. This mode is only only, no local play. You both get to choose a couple of challenges and cards before starting and share them. The traps are more difficult in the fact that they do not slow down to give you time to shoot them. You need to disable them by tripping them first or you will die. Your teammate can revive you, bu you only have a limited number of revives. You can gain a revive by discovering a sarcophagi. You and your teammate share food and other supplies, but only if you are near each other. You individually collect weapons for more realism.

I, personally, am so excited to play this new content when it arrives on October 11th and I hope this inside information has you ready to play as well.

Check out more and pre-order HERE.