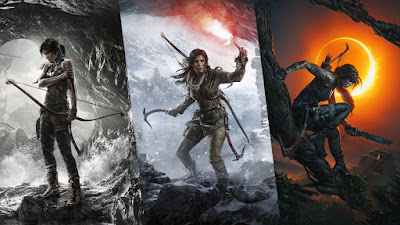 TOMB RAIDER explores the intense origin story of Lara Croft® and her ascent from an untested young woman to a hardened survivor. Armed only with raw instincts and the ability to push beyond the limits of human endurance, Lara must fight to unravel the dark history of a forgotten island to escape its relentless hold.

In Rise of the Tomb Raider, Lara becomes more than a survivor, and embarks on her first Tomb Raiding expedition in search of the secret of immortality. She’ll explore a vast and hostile world, engage in guerilla combat, and discover deadly tombs.

In Shadow of the Tomb Raider, Lara must travel to a magnificent environment filled with the largest tombs in franchise history, hidden secrets, and cunning new enemies. As she races to save the world from a Maya apocalypse, Lara will be forged into the Tomb Raider she is destined to be.

FINAL FANTASY XV is the critically acclaimed roleplaying game (RPG) and the latest entry in the iconic FINAL FANTASY series. Set in an enthralling world where fantasy meets reality, players will join Crown Prince Noctis and his comrades on an epic journey of brotherhood, love and despair as they unravel Noctis's destiny and take up arms against the warmongering empire, Niflheim. With a captivating cast of characters, breathtaking visuals, open-world exploration and action-packed real time combat, FINAL FANTASY XV is the ultimate FINAL FANTASY experience for fans and newcomers to the series.

“Stadia brings new opportunities to our research and development teams, who always love a new challenge,” said Julien Bouvrais, Chief Technology Officer at Eidos-Montréal™. “Being part of the first round of games released on the platform allows us to break new ground, and shows our studio’s dedication to delivering trailblazing experiences for all players.”

“We’re pleased with the opportunity to bring the engaging characters and immersive world of FINAL FANTASY XV to even more players through the Stadia platform,” said FINAL FANTASY Brand Manager Shinji Hashimoto. “The journey of Crown Prince Noctis is the perfect adventure for players to enjoy through Stadia.”

Posted by MaxRaider at 9:29 PM

Lara Croft and the Guardian of Light Page Now Up 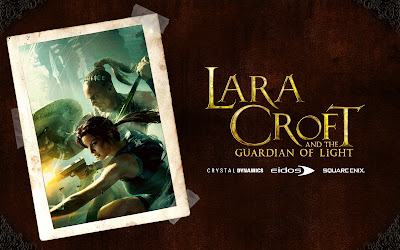 The Lara Croft and the Guardian of Light page is finally up! I've been meaning to add it to my site for some time since it is included in the new era. I've been playing this little gem again recently and it is a fantastic game.

I also noticed that the Things That Go Boom challenge pack is available now on the Xbox! The 2nd challenge pack was never released previously on the Xbox 360 due to "technical difficulties" or so they said. Lara Croft and the Guardian of Light is backwards compatible on the Xbox One and maybe that has something to do with the release?

Posted by MaxRaider at 6:10 PM