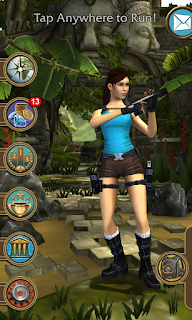 Have you all been playing Lara Croft: Relic Run? If not, I highly recommend it. It is a lot of fun as well as challenging. I've been playing almost constantly. From the moment I wake up, to before I go to bed, during breaks at work, you name it. It's really easy to just pick up and have a run, and with the gameplay varying so much with each play through it never gets monotonous or old. 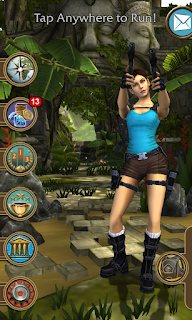 The graphics are amazing and immersive. Lara pushes palm leaves out of her path, swings on vines, parkours over falling debris, dodges enemy attacks, and more. Even on my Nokia Lumia 925, which is a 2 year old Windows Phone, the game looks really good. It does lag here and there though. The Jungle Temple is the first level and what I have been playing mostly since the game's release. I have fully upgraded the relic booster in order to get more relics. I need to focus on upgrading my secondary weapons since the T-Rex is proving pretty difficult to kill. 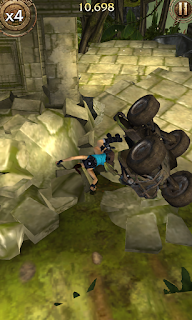 Um yes, there's vehicles! The quad bike is super awesome, but the deaths can be pretty rough! I will say one thing that I've noticed and am kind of disappointed in is that the file size for Windows Phone is smaller than the Android/iOS versions. I've discovered certain moments are not present, such as the quad bike barrel roll scene. Also, the video playback feature is not available. I really would have liked to see all platforms have the same content. Is this a Windows Phone hardware restriction I wonder? 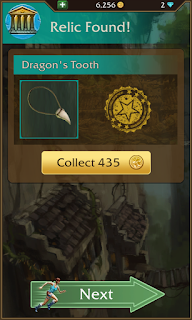 Every relic rewards you with coins and a little more story. I like that Carter Bell is involved and Lara must find him and uncover what's really going on. 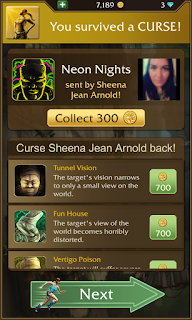 I love the Curse System. Friends on Facebook can send Curses to one another that distort their vision. ShotgunSheena and I are constantly cursing each other trying to get the higher score. 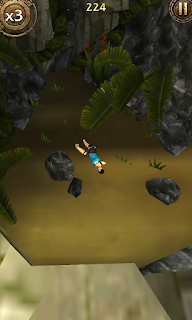 Lara's just hanging out, dead in the water. 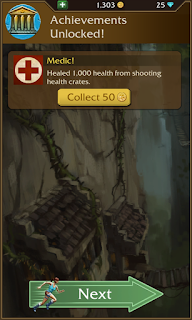 I tend to be an achievement hunter and this game has a lot of them. You get coins/gems for completing them as well. I love that my version connects to my Xbox Live account and there are at least 20 Xbox achievements to conquer. 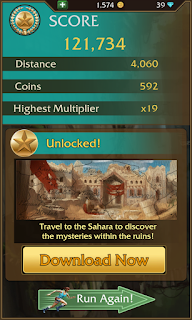 I just found my 15th Jungle Temple relic this morning, thus unlocking the Sahara Desert! This level is like a whole new game with new parkour and climbing moves and a lot more traps.

This game is a must for any Lara Croft/Tomb Raider fan or anyone else for that matter! I have gotten all of my co-workers and friends to play and they're all addicted!

Posted by MaxRaider at 2:03 PM