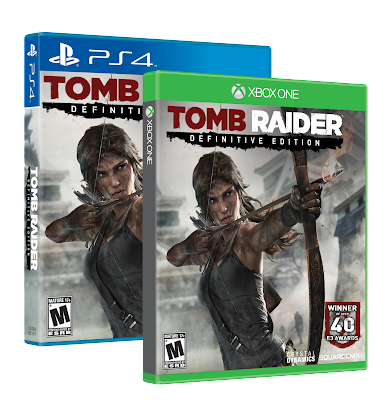 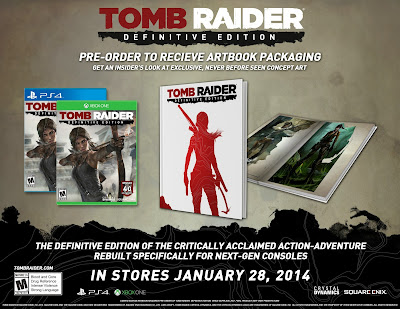 This is super exciting! Tomb Raider (2013) has been re-vamped for next generation consoles! Discover more about it below and pre-order yours today!

"Tomb Raider: Definitive Edition was developed in tandem with our friends over at United Front Games and Nixxes, who worked with core Crystal Dynamics team members and assets to rebuild Tomb Raider from the ground up for next-gen consoles.

The team didn’t simply up-rez the game, they pulled it apart and rebuilt it with obsessive detail and new technology, finally allowing us to reach a vision for the game that we always wanted. Now in native 1080P with TressFX hair rendering and a next-gen Lara model, you’ll get the following in Tomb Raider: Definitive Edition:
As for other next-gen additions, The Xbox One allows you to use Kinect to change weapons, attachments, and navigate the menu with your voice. You can also rotate and inspect relics with hand gestures, and find new viewpoints by leaning into the world. The PlayStation 4’s Dualshock 4 controller lights up red and orange when using the torch, and quick flashes when Lara is shooting. The PlayStation 4 version also allows you to stream Tomb Raider to the PlayStation Vita."...

Tomb Raider: Definitive Edition launches in North America on January 28 and across Europe on January 31, 2014."