New pre-order announcements for the Standard Edition of Tomb Raider! The curious thing is: What is the deal with the "Stage 2" and "Stage 3" dates? Are we going to get different pre-order incentives depending on the time we order? Hmm.. 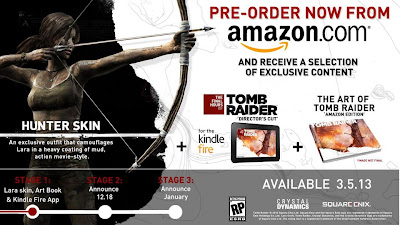 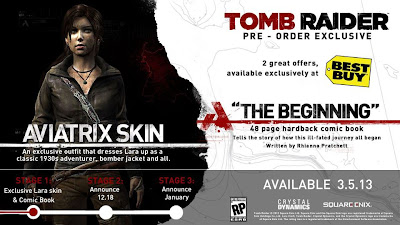 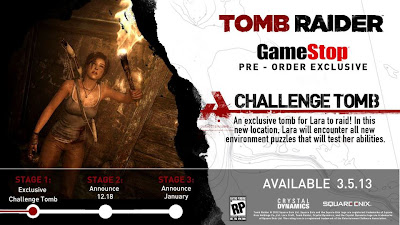 Exclusive in-game EXPLORER BUNDLE. Included in this bundle is an exploration themed CHALLENGE TOMB and an early access bonus survival advantage:
CHALLENGE TOMB
An exclusive tomb for Lara to raid! In this new location, Lara will encounter all new environment puzzles that will test her abilities.
FAST CLIMB UPGRADE
Early access to the fast climb skill upgrade will let Lara ascend mountain faces more quickly. Handy when avoiding her attackers in a fight to take the higher ground!

Exclusive in-game COMBAT STRIKE PACK. This early access combat-themed bundle will improve Lara's chance of survival on the island from day one!
PISTOL SILENCER UPGRADE
The pistol silencer will let Lara use stealthy tactics to overcome even the trickiest of situations
HEADSHOT RETICULE UPGRADE
The headshot reticule will let Lara utilise her weapons more accurately, when used with the pistol silencer, they make for a deadly combination
PISTOL BURST MODE UPGRADE
The three-shot burst pistol upgrade will let Lara unleash a hail of firepower on her foes when under attack
ANIMAL INSTINCT SKILL UPGRADE
Animal instinct skill will light up XP-laden animals in Survival Instinct mode to help you upgrade to the next skill in no time

Exclusive TOMB RAIDER: THE BEGINNINGS COMIC BOOK (digital edition)
Written by Rhianna Pratchett, with cover art by TOMB RAIDER Art Director, Brian Horton, THE BEGINNINGS COMIC BOOK is a digital 48 page six-part comic which tells the story of how this ill-fated voyage of the Endurance came to be. This special edition comic brings together the cast and crew, including a budding young adventurer named Lara Croft, as they prepare for adventure in search of the Yamatai off of the east coast of Japan

Exclusive DLC
Designed exclusively for Amazon.co.uk
More details will be announced in the New Year

The Survival Edition will contain the game, a mini art book compiled by Tomb Raider’s Art Director Brian Horton, a detailed double-sided map of the game’s mysterious Island, and a branded waterproof survival pouch. Digital offerings will consist of an access code to Tomb Raider’s atmospheric soundtrack and a DLC weapon pack.

The Collector’s Edition will include the complete Survivor’s Edition, plus a 6” Play Arts Kai Lara Croft figurine and will come housed in a unique Endurance crew member’s metal survival box.

For more info and to pre-order Tomb Raider visit TombRaider.com