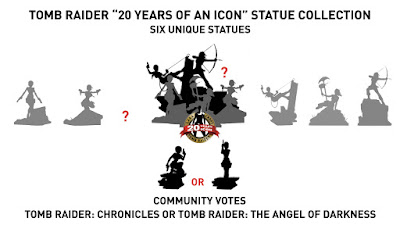 Among the 20th Anniversary festivities at this year's E3, a "20 Years of an Icon" Statue Collection has been announced! The collection, produced by Gaming Heads, will consist of 6 unique statues. 3 from the Core Design era and 3 from the Crystal Dynamics era. All 6 will fit together into an amazing diorama! The last statue is up to a vote by the fans! The choices are between the "Chronicles" cat suit or the original "Angel of Darkness" outfit. Vote Here Now!

Watch the announcement below as Meagan Marie and Rich Briggs discuss 20 Years of Tomb Raider. Brought to us by Tomb Raider Empire