Lara Croft and the Temple of Osiris Character Details/Q&A 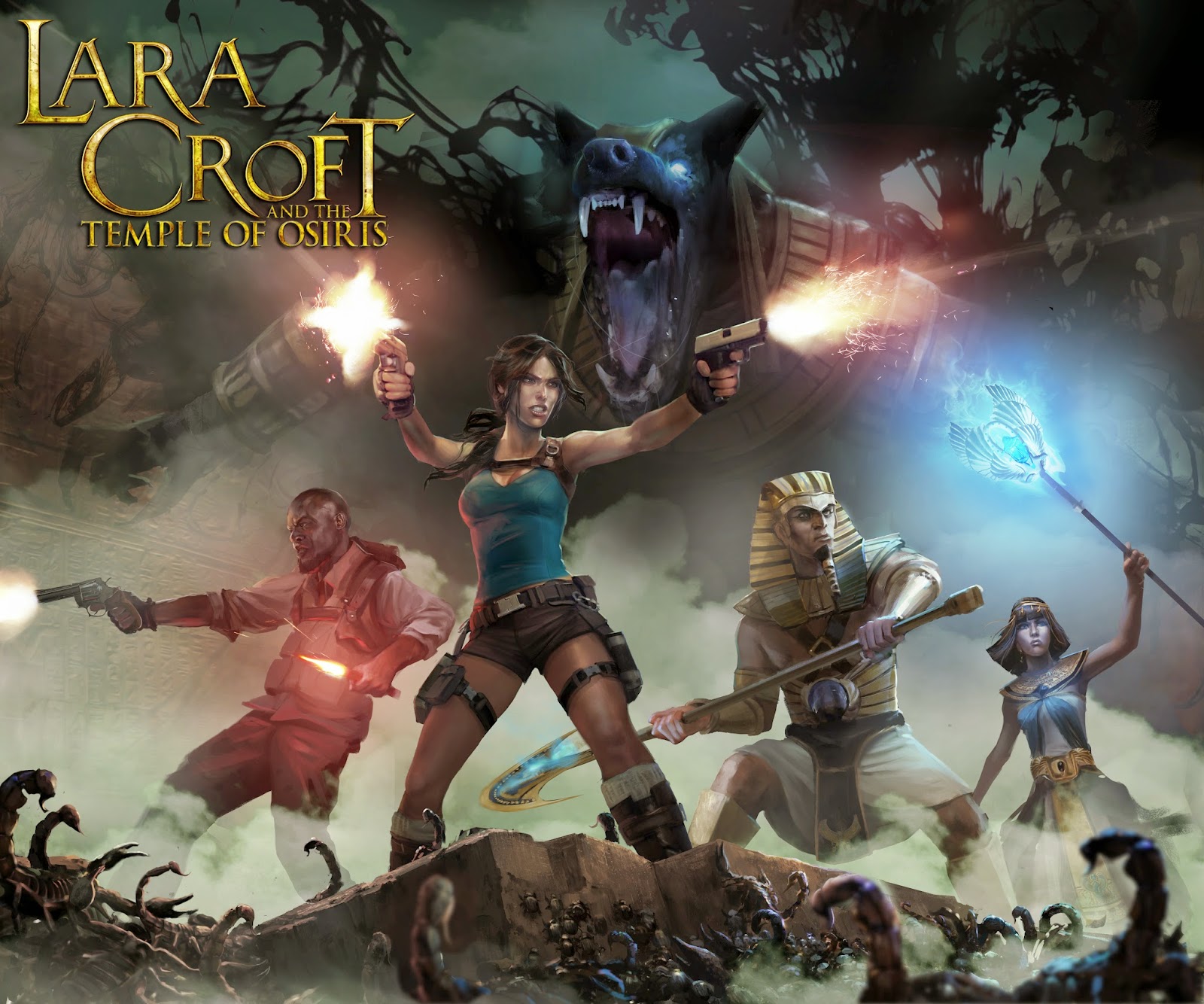 Lara Croft and the Temple of Osiris is less than a month from its release date on December 9th! Are you excited?! I know I am! Dive into the characters and official Q&A below to learn more.

Overview: Lara Croft is the world’s most renowned archeologist and adventurer. Driven by the thrill of finding the hidden truths of the world, she has come to Egypt in order to be the first to explore the newly unearthed Temple of Osiris. When both she and her would-be treasure seeking rival, Carter, are caught in an ancient Egyptian trap, they find themselves marked for death and destined for Duat, the Egyptian underworld. Never one to give up, Lara resolves to find a way to wipe clean her mark with the aid of two exiled gods who’ve been imprisoned in this Temple for centuries. Together, by reconstructing the body of Osiris and using the power of his Staff, Lara can save herself, Carter, and the world from the sinister underworld god Set.

Overview: Carter Bell is up and coming in the world of archeology. Charming and charismatic, he seems born for the limelight. Educated across the world by working with his archeologist father, Carter approaches the study of history from a very different viewpoint than Lara. While he never admits it, he’s a great admirer and fan of Lara Croft. While Lara might never admit it, she’s impressed by his recent rise to fame and obvious talents. Carter is the only other person savvy enough to arrive at the Temple of Osiris when it first emerges, following close at Lara’s heels. When Set’s trap catches them both unaware, Carter finds himself in a world he’d only previously thought of as fantasy and myth. Unlike Lara who will seek the truth at all costs, Carter is a skeptic, yet he finds himself on shaky footing when facing down these gods and magic. This is a chance for him to both compete with and learn directly from Lara.


Age: Visibly early 30’s, but actually many thousands of years

Overview: Isis is the wife of Osiris, and the mother of Horus. Isis and Horus are prisoners of Set’s; held in place by the bait… the Staff of Osiris. They are freed by Lara and Carter when Carter greedily grabs the Staff from its resting place. Now that Carter and Lara are marked for death, they realize that their fates are intertwined with these exiled gods. Isis is regal, noble, and capable, but used to having things done her way. Together with Horus, Isis was one of the few gods with the will to stand against Set’s corruption. Her life-long quest is to recover the pieces of her beloved Osiris, and to use his power to restore the rightful ruler while punishing Set for his blasphemous transgressions. With Lara’s arrival and the discovery of the Staff of Osiris, Isis sees a mere mortal who has the potential to help her restore the body of Osiris, and seal Set in Duat forever. However, she will use her godly powers to both guide and to keep close watch on these mortals, and on her kingdom’s treasures.


Age: Visibly mid-20’s, but actually many thousands of years

Occupation: God-Prince, son of Isis and Osiris, now in Exile

Overview: Horus was born from the union of Isis and Osiris. He is the rightful heir to the throne of Osiris, and sees Set as the face of all evil. Horus is quick to anger and seething with rage over Set’s betrayal of his father, Osiris. He’s been imprisoned with Isis for centuries, and this has sharpened his brooding desire for revenge upon Set. He’s quick, capable, and obeys Isis in all things; she can temper his rage and keep him focused. Despite his age, he’s been imprisoned and in the company of Isis for so long that he’s still naïve in many ways, and is particularly interested and confused by the ways of modern mortals.

Occupation: Former King of all Egypt, Future Ruler of the World

Overview: Set is the god of violence, storms, and chaos, but he desires to be the ruler of all things. If he cannot rule it, then he will destroy it. He killed his brother Osiris in order to claim the throne of Egypt, and then sealed and scattered the pieces of Osiris’s corpse in ancient trap-laden tombs to prevent Osiris’s return. Upon seizing the throne, Set used his growing dark powers to force the other gods to worship him and become thralls to his will. He corrupted Khepri, Sobek, and other gods in short order, but he grew bored of his earthly dominance. After using the Staff of Osiris to imprison Isis and Horus, Set deliberately crossed over to the underworld, Duat. There, he bested Anubis and even Ammit, the guard-dog of the underworld. Set then seized control of the land of the dead. Mastering Duat’s secrets over the course of millennia, Set has amassed an army of the dead in preparation of his return to conquer the world.

He is not yet able to return to the land of the living… he needs something first. But his strength grows by the minute now that the Temple has been once again revealed to the world, and he can return in short bursts to taunt and threaten the heroes threatening his plans for world domination. With Horus and Isis allied to two mortals, Set’s fury will rain down death upon them.

Occupation: Former King of all Egypt

Overview: Osiris was the once god-king of Egypt, life, death, and resurrection. He united the many gods under his rule, and justly led the people from high in his Temple. He was usurped and overthrown by his own brother Set, who mutilated his body into multiple pieces. While Set took power and the legendary Staff of Osiris, Osiris’ wife Isis was able to briefly reassemble Osiris’s body and conceive their son, Horus. Seeing this as a direct challenge to his rule, Set scattered the pieces of Osiris throughout the tombs of Egypt, and entrapped Isis and Horus deep within the Temple of Osiris.

Buried for millennia, the latent power still residing in Osiris’s fragments is the only force still strong enough to control the portal between the land of the living, and the death plane of Duat. Only with the power of Osiris reassembled can our heroes hope to challenge Set.

Details on the new Temple of Osiris Lara model:


When looking at Lara’s new model in Temple of Osiris, some fans have noted that she looks both a bit like her digital download predecessor, as well as the younger Lara from 2013’s reboot. You’d be right.

Scot Amos, Executive Producer for Lara Croft and the Temple of Osiris, helped establish the framework for her look early on:


-          She also couldn’t be a Guardian of Light lookalike, as the model needed to take Definitive Edition sensibilities into play.


-          The team also wanted to have a “classic Croft” feel from the series origins, and stand apart as the mature “I’ve seen the world,” confident Lara.


-          Aiming for a modernized classic, they kept the homage of dual pistols, classic colors, and upgraded materials, fit, size, shape, and her refined face.

Here’s what our Art Director, Brenoch Adams, had to say on creating the new Lara:


“In creating Lara for Lara Croft and the Temple of Osiris, we used the strengths of our character technology to bring a classic inspired Lara to a very high fidelity. Dual pistols, backpack, ponytail, and other features that represent Lara at a high level were essential to showing Lara as the traveled tomb raiding veteran. We used the same sophisticated materials for skin, hair, metal, and cloth that we use on 3rd person titles in an effort to present the highest quality possible. We are very excited to share the results, and think players will be amazed at the amount of detail and craft we’ve packed into this title.”