Now, it's not officially announced as "Stage 2" yet, but I believe it will be. I also believe that there is more to be announced as part of the Stage 2 pre-order incentives. Hey, we'll take what we can get right? Introducing the Tomb Raider Scavenger Hunt! This is super exciting and fun!


U.S. and Canadian residents who pre-order the game will have access to the Tomb Raider Scavenger Hunt. Win a number of exclusive prizes and earn points that unlock DLC skills!

It also seems that one of Walmart's pre-order bonuses is $5 in Vudu movie credits. Plus the nifty card. 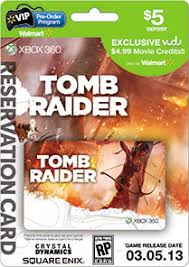 Posted by MaxRaider at 4:02 PM